The original Mak’s Noodles head chef Chan For Kam relocated to Singapore’s The Centrepoint outlet. We have already had the opportunity to sample his famous wanton noodles. An in-depth research of the other iterations of Mak’s Noodles yielded Mak An Kee as the frontrunner. This was from having a read of the popular Hong Kong food critics and from purveying the reviews at OpenRice, the largest Hong Kong food review site. So how does the wanton noodles at Mak An Kee fare compared to the one by the head chef at the original Mak’s Noodles?

It is not too difficult to get to Mak An Kee. Take the MTR to Sheung Wan exit E1, walk to your right down Des Voeux Rd Central and turn right at Wing Kut St. You should be greeted by that large white sign with the Chinese phrase ‘麥奀記 (忠記)’. 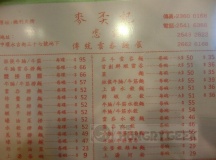 One thing I’ve noticed about Hong Kong eateries is that the more crowded they are, the worse service you get. I guess that is how the capitalistic free market works. I urge popular Hong Kong eateries with bad service to raise their prices and improve their service instead, otherwise they will find it difficult to increase their takings. When we arrived at Mak An Kee it was near their closing time just before 7pm. The place wasn’t full and the staff was helpful.

It is not too hard to order from their menu given that they have one signature item that is so famous. Just order their wanton noodles and sit tight.

Having a look at all the photos and I really wished that I was back in Hong Kong. One bowl of their wanton noodles will set you back by HK$35. As you can see it is the usual small Mak’s bowl size, supposedly ‘keeps the noodles from turning soggy’.

Their wanton noodles tastes as nice as it looks. It is really delicious. It is the best bowl of wanton noodles that I’ve had the chance to eat. As per usual with Hong Kong food, you can feel that they went a bit overboard with the salt and seasoning. It feels like they put in twice of the usual stuff into their soup, but the end result is just fantastic. Sipping the soup brought a large welcoming oomph to my tastebuds. The noodles are very near al dente or QQ standard but very slightly firmer than the perfect level. There is a very generous number of wantons together with the spring onions. The spring onions actually play an important part on the overall taste of the dish, boosting the flavour of the soup. The wantons eaten together with the noodles and the soup is a heavenly combination that is hard to beat. We rate this 4.6/5.

It would have been higher if they were able to make the perfect al dente noodles, but perhaps we were just a bit unlucky.