The storefront for Taipei Seoul Cafe

TaiPei Seoul Cafe is a new cafe in the Thomson area that opened in July 2016. The name of the new cafe is good enough to get me all excited as it features two of my favourite cities – Taipei and Seoul! As the name goes, this cafe is selling a mixture of Taiwanese and Korean cuisine. But what attracted us (me, actually) to head down to this little cosy cafe is actually their creative mocktails that I saw on their Facebook page. They creatively named their drinks after famous Taiwanese (偶像剧) and Korean dramas like You Who Came From the Stars (来自星星的你) and Descendants of the Sun (太阳的后裔).

The Taiwanese + Korean concept was a joint venture by three best friends behind the cafe. All three of them had F&B experiences respectively from Taiwan and Korea and they decided to set up this cafe together in Singapore. They are each in charge of the three important elements (mains, mocktails and desserts) of TaiPei Seoul Cafe respectively.

The whole cafe is designed in a Tiffany Blue and white colour theme. They really know how to seize a girl’s heart with this dreamy concept design. Their Facebook page easily engaged more than 10k followers within the first month of the cafe opening, which is pretty impressive! 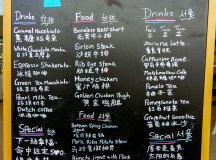 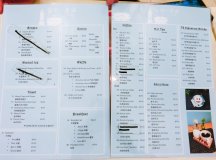 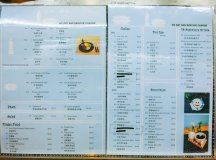 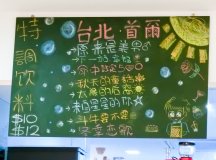 We went down to TaiPei Seoul Cafe twice to try out their food and drinks on two separate weekday nights. The cafe wasn’t too crowded and that makes it a very cozy and relaxing spot for us to spend some quiet time. During our first visit near their opening date, we had to wait quite long for all of our food to be served even though the cafe wasn’t even half full. But during our next visit a few weeks later, they sped up the food serving speed and significantly improved the dining experience.

Not only do they look good, the colourful mixed drinks are given ‘dramatic’ names. Yes, they named the drinks after popular dramas! The first mocktail that we ordered on our first visit (pictured above) was named after one of my favourite drama – You Who Came From the Stars (来自星星的你)! It tastes like flavourful fruit punch with a mixture of several fruits like grapes with a tad of carbonated gas infused. We really liked it!

The special mocktails cost around S$10 to S$12 each. Some of the mocktails are huge in size so it’s recommended to share these drinks.

We had their You’re Beautiful (原来是美男) and Bull Fighting (斗牛要不要) at 50% discount during their special drinks promotion period. If you’re a passion fruit lover you’ve got to try Bull Fighting (斗牛要不要). It’s a mixture of mango and passion fruit with an addition of an ice pop (What!?). The ice pop represents the female lead (Hebe) who always dressed in colourful outfits in the drama. The taste of this drinks reminds me of the Passion Yellow Cocktail at Chir Chir. TaiPei Seoul Cafe’s mocktails have really won us over and we rate them a solid 4.2/5.

These special drinks are not included in the printed menus but written with chalk on a blackboard. According to the owners, they have flexible menus for these drinks. TaiPei Seoul Cafe will release new flavours from time to time according to their customers’ requests.

At first we were quite surprised when a western dish was introduced to us as their recommended item. We were like “Hmm… I thought this is a Taiwanese and Korean cuisines cafe?”. The owner later explained that some of their dishes are indeed western cuisine but with a twist of Taiwanese and Korean influence. But nevertheless, the black pepper sauce was quite nice and you won’t feel jelak after finishing the whole plate. I shared the steak with David and strangely my half was pretty tender but David’s half was hard to chew. He was wondering if the steak was indeed done at medium rare wellness as per requested. Looks like the steak wasn’t evenly done or perhaps he was just unlucky. LOL. We rate the Sirloin Steak set at 3.8/5 and you can get it at S$18.90.

Note from David – I really really liked their black pepper sauce! Perhaps one of the best out there.

Here’s another recommended dish from TaiPei Seoul Cafe. Similar to the Sirloin Steak set, the Golden Chicken Thigh was served with egg and spaghetti topped with black pepper sauce. In addition to the mains, the set meals also come with the soup of the day and salad. The skin of the chicken thigh has the perfect crispiness and it goes well with the spaghetti and the black pepper sauce. We finished every single bit of it.

However, here’s a little suggestion, even though the pepper sauce drizzled on the hot plate with high temperature gives the sizzling shiokness, but the sauce dried up very soon (you can ask for more). Perhaps the sauce should be added after the temperature of the hot plate has simmered down a bit, just like the way Pepper Lunch does it. We rate this Golden Chicken Thigh set 4/5 and this will set you back S$13.90.

Soup of the day and salad from the set

Initially when we ordered this dish, we were expecting a soup based Jigae but actually it is the dry version, like army stew (Budae Jigae) where the soup is dried up while cooking. The spiciness is a bit too overwhelming that we couldn’t really taste anything else other than spicy. I hope for a more flavourful chicken jigae as well as softer potato and rice.  We rate this 3.3/5.0 and you can get it at S$13.90.

Waffle with Vanilla Ice Cream (S$10.90) – 3/5 –  We prefer crispier and fluffier waffle but for those who like pancakes you might enjoy this softer version

Yuzu Cheesecake – Cheesecake with a sour hint from yuzu sauce, not bad!  – 4/5

TaiPei Seoul Cafe is a nice place to chill with friends while enjoying their special mixed drinks and food. If you’re a fan of Taiwanese Idol dramas or Korean dramas, do try out their signature mocktails named after your favourite drama. You will be pleasantly surprised by the drinks they make! For a new cafe, TaiPei Seoul Cafe manages to include a wide variety of items in their menu. That’s pretty impressive. This glorious Tiffany blue themed cafe has just so much to offer. Instagram worthy? Absolutely.